In the state of Haryana, Bhiwani is called as the city of temples due to its numerous religious places dotting the whole city. Apart from its status as Choti Kashi, this city has been a hub of politics as well. The regional politics of Haryana has received its many legendary leaders and Chief Ministers from this city itself. Bhiwani became a district in the year 1972 and since then, it has progressed manifold in terms of industries, trade, and overall infrastructure. It is situated around 124 km from national capital Delhi. This has also boosted prospective for overall development of this district in recent years. It is also a highly populated district in Haryana.

The history of Bhiwani can be traced back to the pre historic era of Harappan civilization in this region. There have been excavations to prove this fact as well. These evidences were recovered from the nearby areas of Bhiwani like Naurangabad and Mitathal. Artifacts like pots, toys, coins, tools, etc. were excavated from these sites and they are around 2500 years old. The city has witnessed prominent dynasties like Kushans, Gupta, as well as the mighty Mughals. 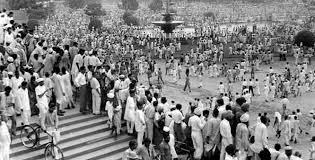 Interestingly, Bhiwani got its name after the wife of a Rajput named Bhani. With passing of time, it later, became Bhiyani and subsequently to Bhiwani. The present district was formed on 22 December, 1972 by segregating Mahendragarh and Hisar districts. Read More....... 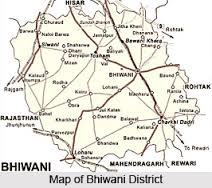 Bhiwani is aptly located at an altitude of 28.190 to 29.050 North and longitude of 75.260 to 76.280 East. It is flanked by Hisar on its north while it has Rohtak towards east. Jhunjhunu and Churu districts of Rajasthan border it on west and Mahendragarh and Jhunjhunu are there on its south.

Temperature in Bhiwani is typical to the plain areas of north India. It has extremely cold winters and blistering hot summers. Temperature in summers can rise to as high as 45 degrees while it can drop to 2 degrees in winters. Rainfall is quite scarce in this city and it takes place mostly in the months of July and August only. Read More.........

Bhiwani is a historical and religious place in Haryana known for its temples that are as many as 300 and there are also several monuments located in the city. These temples and historical places are visited by many tourists all through the year. The Famous Gauri Shankar Temple of Bhiwani is venerated by the people all over world. The prominent tourist attractions in the city are: 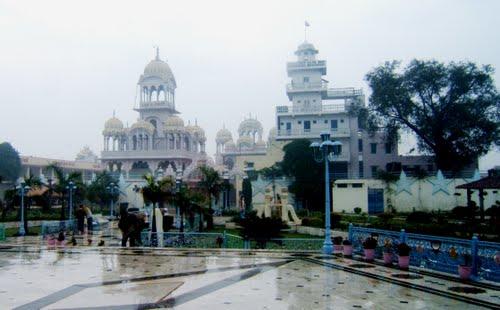 Bhiwani was ruled by several rulers all through its history. Remnants of these rulers and their empires can still found in this city to tell the stories of that bygone era. The places of historical importance present in this city are:

The district of Bhiwani is well known for its quality education imparted in its educational institutes. It has high influx of students from the other cities of Haryana and all over the country. There are three top engineering colleges in the district and numerous colleges for top education in this region. Apart from these institutes, there is a reputed medical college also for those who wish to pursue education in medical sciences.

Bhiwani has always been an epicenter of commerce and trade in Haryana state since its history. Even during the reign of Mughals here, Bhiwani was a trading center and it has retained its position as such even today. The city has some major textile mills established by leading business houses of India including T.I.T. Mills set up by Birlas in Bhiwani. Bhiwani Textile Mills is another unit established in this city. These manufacture staple yarn and PV blended fabrics primarily in their units.

There are many small scale industries also present here for growth of business in Bhiwani. These industries are set up to boost the economic growth of this district. There are about 2250 small scale industries in this district and more than 5 export units. Agro based products along with products like plastic and PVC/ RCC pipes are manufactured in these small to large scale enterprises of Bhiwani. Otherwise, agriculture is the main occupation in this city pursued by most of people here. Read More.......

Art and Entertainment in Bhiwani 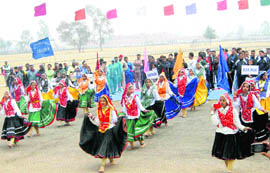 Art may not be in the mainstream of Bhiwani but it can be found in its history and architecture. The city has many local handicrafts like wooden items including carved boxes, furniture, doors, and other decorative artifacts.

Being a city of textiles, it has famous cotton crafts that include doormats, curtains, bed sheets, and rugs. Folk arts run into the veins of this city known for its traditional dances and artifacts.

People and Culture in Bhiwani

People of Bhiwani are the typical Haryanvis known for their zeal and hardworking nature. Mostly, the people here are engaged in agriculture which is the primary occupation in Haryana. Jats, Brahmins, and Gujjars are the main castes residing here. The population of Bhiwani also consists of people from other states who visit the city for education or employment. Haryanvi is the local language though Hindi is the official language in this city.

Haryanvi culture is famous for its folk music and dance that are vibrant and colorful. Along with popular festivals, there are many regional festivals like Guga Navmi, Gangaur, and Lohri being celebrated by people of Bhiwani. Festivals are celebrated here with full enthusiasm and food is very sumptuous in Bhiwani. There are many famous eateries in the city to serve the taste of Bhiwani which is spicy, delicious, and fulsome.

Bhiwani has two large and reputed textile mills which manufacture high quality cotton fabric. This material is sold in the local markets also though it is primarily exported. The markets in Bhiwani have many retailers and wholesalers selling this merchandise of the city along with many other wooden handicrafts commonly found here. 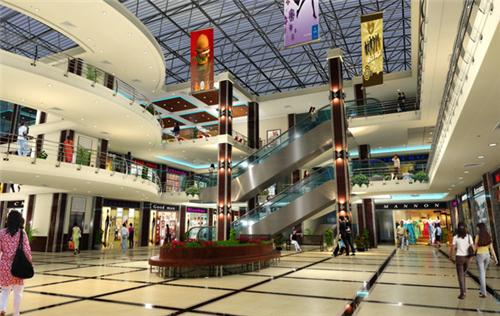 The city has been progressing at a fast pace and hence, it also has the contemporary culture of shopping malls existing. There are many shopping malls in the city namely City Mall, Halwasiya Mall, Sun City Mall, Bhiwani Shopping Complex, etc. HUDA market is one of the famous markets in Bhiwani. Read More.........

Demographics and Other Important Facts of Bhiwani

The historic and temple rich city of Bhiwani has a stronghold in business, sports, and armed forces of the country with many leading people related to these respective fields hailing from this place. The rich culture and administrative control have made it a fast emerging district in Haryana having its headquarters at Bhiwani city. The other important demographics of Bhiwani are: